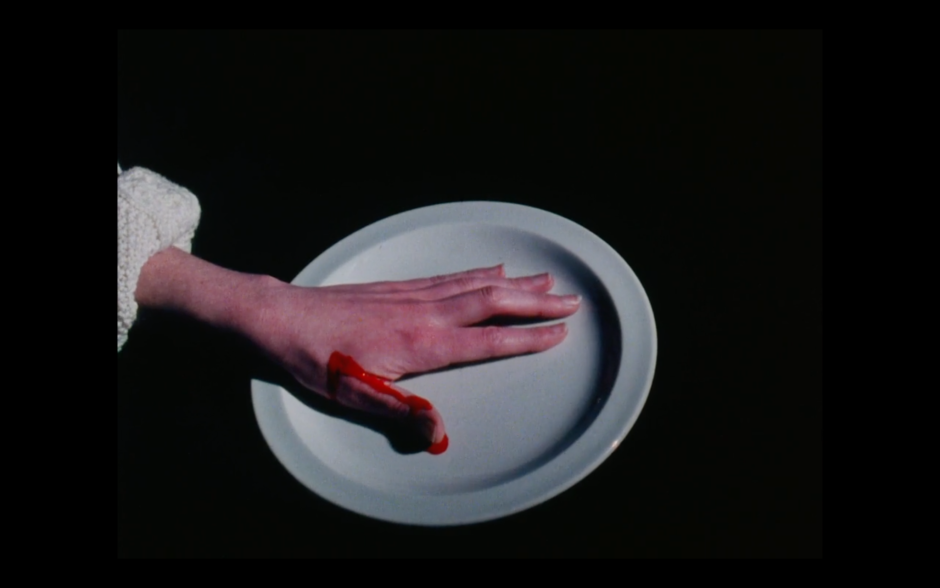 The free access streaming platform Another Screen – created and curated by the feminist film journal Another Gaze – presents a program consisting of a selection of Sandra Lahire’s films.

In the 1980s and 1990s, the British artist had an influential role in the London experimental and feminist cinematic production. She only made ten films, all of which are short or medium length, and seven of them are being presented online, with new critical writings to be released by the platform as well. The viewing of these films allows us to get to know this woman who is almost not spoken of and her body of work, which cannot be detached from her, and which is an extension of her. To see Lahire’s films is to be invited to step into her intimacy and to empathize with her body and so many others that she shows us. That seems to be the power of her filmmaking – to weave everything together and to notice the intersectionality that connects multiple aspects of the feminist movement, that she supports, and of human life itself. The individual and the collective don’t dissociate from each other, just like what is artistic doesn’t dissociate from what is personal, and neither does the human from the non-human – all her movies mirror this overarching logic that binds supposed opposites. The image processing is always hectic, and not only does everything fit in the same film but also everything dances together – as the program presentation describes, a blend of documentary, performance, animation and experimentalism unfolds in each project with a very distinctive harmony. Lahire herself embodies manifold aspects: she was a lesbian, feminist and queer activist in Thatcher’s time, suffered from anorexia, and supported the anti-war and anti-nuclear energy movements. All these themes reflect in her films, enabling us to raise questions that are still relevant today, which is a sign that Lahire also surpasses generations – and that the same systemic problems are still being dragged…

Terminals (1986), Plutonium Blonde (1987), Uranium Hex (1987) and Serpent River (1989) are the 4 films that the director made about the adverse effects of nuclear energy production. Uranium mining proceeds despite the known negative repercussions on human health and the environment. It is the voices of women, workers in this industry, that disclose their reality and concerns. The films intertwine those voices and bodies with the machines and colossal sounds they deal with daily, exploring the harmful effects of capitalist industrial progress on their bodies and communities. The results are fusions of superimpositions of images and sounds, changes and reversals of speed, always accompanied by narrations that guide us through those troubling journeys across the mutations technology triggers: we see repeated images of X-rays as proof of radiation-caused diseases, and someone telling us that the local river’s waters are contaminated and not fit for consumption anymore. “You can’t drink the water to save your life” is the conclusion of that woman. Both the bodies and natural resources carry open wounds from the world’s rampant exploration.

In this artist’s work, the specific wounds that patriarchal culture cuts up in the feminine body are also a point of reflection and critique. In Arrows (1984), for example, Lahire brings up certain cultural dynamics that contribute to the emergence of anorexia cases, namely women’s historical subjugation as passive objects of desire and the attempts to mold feminine bodies according to hallucinatory beauty standards. Lahire describes invasive surgical procedures of liposuction, animates magazine clippings of female models to the sound of an aerobics class prompts, and retrieves Eve’s biblical image as a reminder of the dominant symbology of woman as sinner. As a gesture that connects these collective narratives with profoundly intimate feelings, the filmmaker establishes a parallel between images of her anorexic body and caged birds, implying the suffocation that she feels and confesses to the spectators: “If only I was not alone in this big empty skin. If only you could come in and comfort me.” This was Lahire’s first movie and with it she revealed the ability to not be afraid of her vulnerability and to expose herself in all her sufferings, perhaps as an attempt to bond with other anguished bodies who can relate to her through her films.

The British director’s filmography is also highlighted by the close dialogue with the poet Sylvia Plath. It is Plath’s voice that reads some of her poems in Lady Lazarus (1991), alternated with excerpts from an interview she gave just before her death. The use of language is articulated with Lahire’s usual constant flow of images, this time on the theme of suicide, reminding us we can’t escape our mortality. There’s a constant poetic aspect in the visual parallels that Lahire creates. In all her works, the tangle of languages is on the verge of becoming disordered, however, there is a surprising lucidity that shelters so many aspects of the human experience. The intricate image and sound montage seems to be guided by the torments that a woman who doesn’t conform and finds affinities everywhere feels in her skin. Her image sequences become a body – they talk to us, sing to us, cry and laugh, take us to fly with the birds while also leaning us against the wall, not letting us look away while what they have to say hasn’t been said yet. Sandra Lahire created films that are constant metamorphosis, everything transforms into everything, and everything refers to the body that, tireless, doesn’t shut up.